Join DiscordCreate your own 3D Frame

The Frahm Exclusives collection represents customized frame NFTs, tailored for exclusive artists, partners, and specific NFT artworks. These frames are hand-crafted by Frahm and jointly curated with our partners.

True understanding lies beyond knowledge and conception in the source of awareness, where there seems to be an emergence which on the surface seems like infinite loops processing with each other, but in its core is pure joy - expressing its radiance which is infinite creativity and love.

Chryseis is Archan’s first Dynamic NFT. The artwork changes between Day and Night mode. The music is created using generative processing and explorations. Having always loved exploring soundscapes, this new concept comes as a beautiful way of sharing alongside his visual Journey.

Archan's visual expressions are part of a journey which is influenced by the mysteries of existence and how every action, emotion, our interconnectedness in a universal scale sets of a chain of reactions.

His work has been featured in Rolling Stone magazine, Vogue, and VICE Creators. He has achieved recognition from music artists like Kanye West, in addition to collaborations with Lindsay Lohan and Justine Bateman and brands such as Nike, Sony, Redbull, Microsoft, and Samsung, among many others.

In Hindu culture, the Vedas are considered to be ”Apauruṣeya”, which means "not of a man, superhuman". They are revelations of sacred sounds and texts heard by ancient sages after intense meditation. Samaveda is the Veda of melodies and chants. It is an ancient Vedic Sanskrit text, and part of the scriptures of Hinduism. One of the four Vedas, it is a liturgical text which consists of 1,875 verses.

The Samaveda frame was specifically designed for Archan Nair’s artworks Chryseis and Prana. Like Chryseis, Samaveda #1/#10 is a 10/10 edition. It gives Chryseis space, but also boundaries while allowing it to live. It pays tribute to Archan’s brilliant art, cultural heritage, and the frame as a unique piece of art.

Archan has been a big inspiration and coach for us at Frahm, and we are deeply grateful for the opportunity to collaborate with him.

We are also humbled that renowned collectors such as Vincent van Dough together with leading NFT fund Starry Night Capital as well as the Pellas Gallery in Boston have received the very first edition out of the Frahm Exclusives collection. 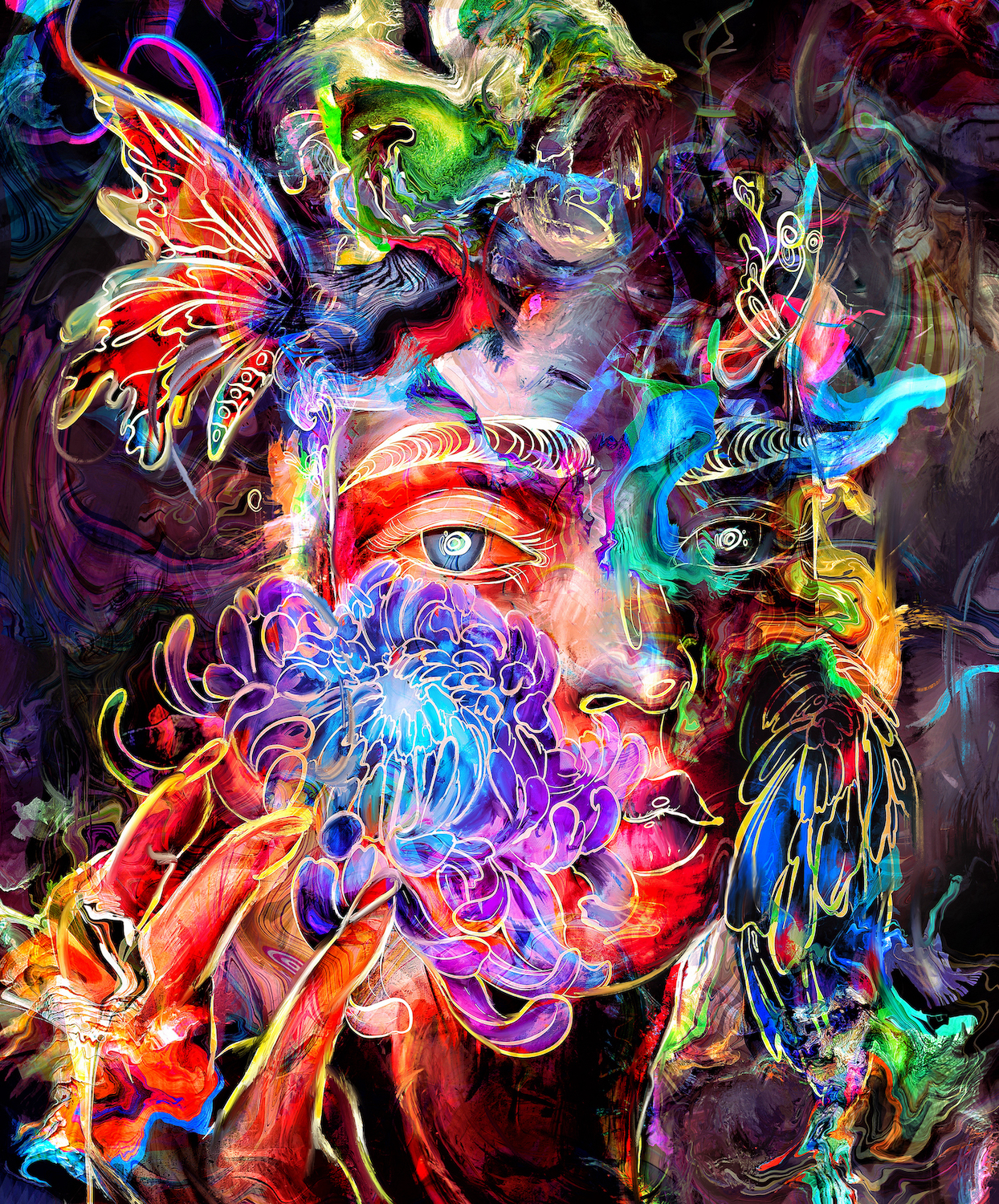 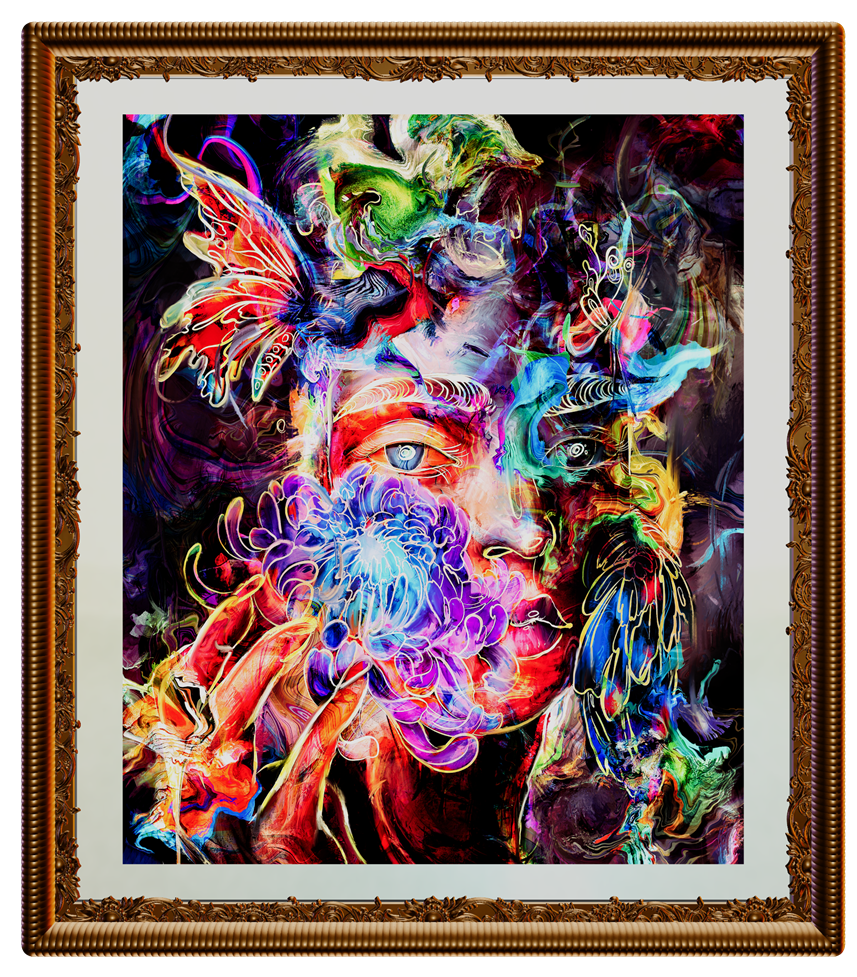 She breathed in all that harmed,
And breathed out life, ballooning,
Her Prana conducted all energy,
Until every flower, was blooming!
Her touch gave flowers their colour,
And her skin shared beauty with them,
The petals they all joined in formation,
Like an unseen, newfangled, rare gem.
Her eyes were stores of the spirit,
That butterflies swarmed in to feed,
Her gaze gave comfort to all beings,
Some in ecstasy, and some in need.
Her existence was one with all nature,
From heavens, she did draw her mana,
And dispersed it all, to every creature,
Through her wondrous, magical Prana.

In Hindu culture, the Vedas are considered to be ”Apauruṣeya”, which means "not of a man, superhuman". They are revelations of sacred sounds and texts heard by ancient sages after intense meditation.

Samaveda is the Veda of melodies and chants. It is an ancient Vedic Sanskrit text, and part of the scriptures of Hinduism. One of the four Vedas, it is a liturgical text which consists of 1,875 verses.

The Samaveda frame was specifically designed for Archan Nair’s artworks Chryseis and Prana. Like Prana, Samaveda #0 is a 1/1 edition. It shares the same base frame style with Samaveda #1/10, but it has its own aspect ratio, is built on a wooden texture, and integrates an ivory passepartout. It pays tribute to Archan’s brilliant art, cultural heritage, and the frame as a unique piece of art.

Be the first to know about the Frahm Genesis Drop!

Showcasing the finest framed art. The Hall of Frame represents a Frahm curated gallery to exhibit pieces out of the Frahm Exclusives Collection and other remarkable art. The goal is to establish a Frahm reference gallery featuring great artists, unique artworks, and the finest frames.

With its User Galleries, Frahm is providing a new way to exhibit and experience NFT art. User Galleries are available to Frahm Genesis Drop holders and allow them to showcase their collection in a different light. Our gallery view allows one to touch, move and discover framed NFT art through new perspectives.

Physical exhibitions of NFTs in traditional galleries will increase. Frahm frame NFTs can not only complement the display of art in the metaverse, but also in the physical world. Our frames can be incorporated into the exhibit of NFT art through digital screens, providing curators with additional value.

The Frahm Exclusives Collection represents customized frame NFTs for exclusive partners. Together with creators, collectors, and galleries, we want to jointly promote the appeal of framing art in the digital sphere. Custom frames will be displayed in showcases, integrated into exhibitions and auctions.
‍
Frahm Exclusives consist of frame NFTs tailored to specific NFT artworks. Pieces in this collection range from 1/1s to small-scale series. These frame NFTs are hand-crafted by Frahm and jointly curated with our partners. Each piece is exclusively mintable via the Frahm Exclusive ERC-721 contracts on the Ethereum Blockchain.

The Frahm Genesis Drop Collection is the first Frahm NFT Drop. It consists of a limited supply of unique frame NFTs based on generative art. Each will be a unique artwork consisting of various layers, attributes, and rarities.

At Frahm, we want our first NFT Drop to be special. We want to establish frame NFTs as unique pieces of art. Instead of a manually curated process, all Genesis Drop NFTs will be the output of our own generative art algorithm. An autonomous system we have been training for several months.

Holders of Genesis Drop frame NFTs are early stakeholders of Frahm and will enjoy additional benefits within the community. Amongst others, Genesis Drop NFTs are access tokens to their own User Galleries.

The Frahm Factory Collection will offer creators, NFT projects and galleries custom crafted frame NFT editions. Editions are specifically designed to match your NFT, design and story. We create frame NFTs according to the requirements of our clients in small- to large-scale editions, specific file types and tokenized on various Blockchain networks.

Giving creators, collectors, and galleries a tool to frame NFTs. Our Framing App allows users to merge an NFT plus a frame NFT into a framed version on the user-interface level. In this process, new high-resolution, metaverse-ready 2D and 3D file types are generated.

With its intuitive user interface, the Framing App provides users with a new, unique experience and perspective in discovering their art. In addition, framed NFTs can be downloaded as high-resolution images, Twitter background images, or viewed in the Frahm gallery view.

In the ownership economy, you can take your assets with you, everywhere. At Frahm, we believe that our frame NFTs will provide the most value to collectors if integrated natively into their favourite digital galleries and virtual spaces in the metaverse. We are collaborating with leading NFT galleries and platforms. It is our ambition to complement our partners with native integrations of our frame NFTs.

Frames can provide the most value if they are specifically tailored to a painting. Reflecting its colour composition, playing with its story, and enhancing its appeal. Frames function as a bond between the dream world of art and the surroundings that the work inhabits.

We provide customized frames NFTs for collectors, creators and galleries on demand as a service. Our custom frame NFTs are hand-crafted and curated along a consulting process.

The Frame SDK comes with an intuitive user-interface offering a no-code experience. To accomplish our vision, we will democratize access to our SDK and cultivate a community-owned creator economy around it.

Framing NFTs should work inter-operably across a variety of NFT platforms and galleries, reflecting composability as a core feature of Web3 technologies. A prerequisite to enable this is bringing information about framed NFTs on-chain.

Following discussions with various stakeholders, we see the need for an Open Frame Registry. This will be a piece of public infrastructure within the metaverse frame stack. Like the ENS Domain Registrar, it will map wallet, NFT and frame NFT data for all Web3 websites to access.

We envision a future in which the metaverse frame stack represents a set of core infrastructure services for the NFT ecosystem. It is our goal to create a community owned platform managing and governing these services. Building the Frahm Dao will become an objective once we successfully have built an initial frame stack which is worth governing.

As a specific segment of the NFT art ecosystem, we foresee the need for a dedicated frame NFT marketplace. The Frame Marketplace will be a key infrastructure component to explore, discover and trade frame NFTs.